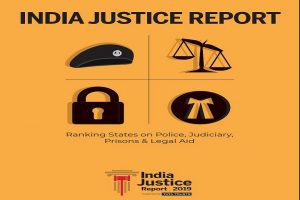 According to ‘India Justice Report 2019’, Maharashtra is the top state in delivering justice to its citizens followed by Kerala, Tamil Nadu, Punjab and Haryana in the first-ever ranking of states on their capacity to deliver justice to citizens. The list of seven small states (population less than one crore each) was topped by Goa, followed by Sikkim and Himachal Pradesh. In this classification, Jharkhand, Bihar and Uttar Pradesh are at the bottom.

The ranking is part of the India Justice Report (IJR) 2019, an initiative of Tata Trusts in collaboration with Centre for Social Justice, Common Cause, Commonwealth Human Rights Initiative, DAKSH, TISS- Prayas and Vidhi Centre for Legal Policy. The India Justice Report brings together, in the first such exercise, otherwise soiled statistics, from authoritative government sources, on the four pillars of justice delivery – police, judiciary, prisons and legal aid.