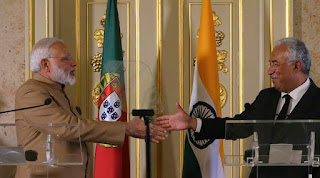 India and Portugal have signed eleven MOUs for cooperation in areas including double taxation avoidance, science and technology, trade and investment, nanotechnology, space research, administrative reforms and culture. 11 MoU’s were exchanged in the meeting and there was the announcement of the launch of a joint science fund for which both India and Portugal will contribute Euros two million each. 5 of the MoU’s were in the area of science and technology.
One of the MoU’s was signed for the creation of an India Portugal Space Alliance and for advancing collaborative research. These agreements will promote India’s science and technology partnership with Portugal, towards the establishment of a unique Centre on the Azores Archipelago – the Atlantic International Research Centre.