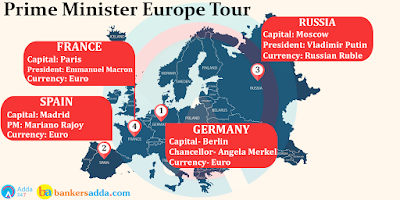 Both the leaders have signed 12 agreements including the Saint Petersburg Declaration. The agreement was signed by PM Narendra Modi while visit to Russia after from Germany and Spain. Both the countries had agreed to interact closely on various fields including economy, manufacturing, energy etc.
Static Takeaways for SBI PO Mains Exam-
Source- The Indian Express