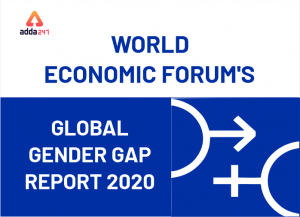 India has slipped four places to rank 112th globally as per the Global Gender Gap Report 2020. The report was released by World Economic Forum (WEF) headquartered at Geneva. Iceland has topped the report and remains the world’s most gender-neutral country while Yemen was ranked the worst (153rd) in the report. As per report, the most improved countries were Albania, Ethiopia, Mali, Mexico and Spain. Among regions, Western Europe has made the most progress on gender parity (standing at 76.7%).

As per WEF, the time it will take to close the gender gap has narrowed to 99.5 years in 2019 while the number was 108 years in 2018. WEF stated that this year’s improvement can largely be ascribed to a significant increase in the number of women in politics.

The Global Gender Gap Report 2020 has assessed 153 countries on their progress towards gender parity in 4 dimensions:

The report also examines gender gap prospects in the professions of the future.

Overall around the world, this year’s index highlights areas where policy makers need to focus greater attention. At the federal level, greater political representation and in some nations, any representation at all for women is a pressing need. Policy makers are also required to take action to better equip younger generations particularly in developing nations with the skills to succeed in the world of future jobs.