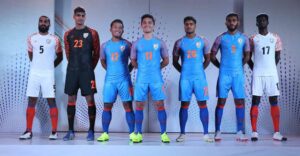 The Indian football team remained static at 101st place in the FIFA rankings. India had finished third in the King’s Cup in Thailand. The Indian team is at 18th spot among the Asian countries led by Iran (20th), Japan (28), Korea (37), Australia (43) and Qatar (55) form the top five in Asia.