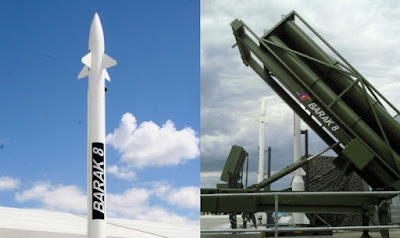 Ballistic missile Barak-8 was successfully tested from Balasore district of Odisha. The missile was launched from test fired from launch pad no-3 of the Integrated Test Range (ITR) at Chandipur. The Barak-8 is India’s new surface to air missile which is developed jointly with the Israel.
Barak-8 is a medium range and surface-to-air type ballistic missile and has the capability to identify and hit a target missile within a range of 70 km. The missile is about four-meter long and weighs 275 kg. It has capacity to carry a payload of 60 kg. The system also includes a multi-functional surveillance and threat alert radar (MF STAR) for tracking, detection and guidance of the missile.

So let’s do:
1. Name the missile, which was successfully tested from Balasore district of Odisha, recently?