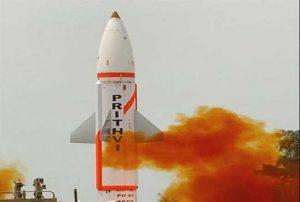 India successfully test-fired its indigenously developed surface-to-surface nuclear-capable Prithvi-II missile off Odisha coast. The Strategic Forces Command of the Indian Army conducted the user trial of the 350 km range missile from a mobile launcher from launch complex-3 of the Integrated Test Range at Chandipur.

The missile weighs about 4,600 kg, is capable of carrying 500 to 1000 kilograms of warheads and is thrust by liquid propulsion twin engines. The 9 meters tall, single-stage liquid-fueled Prithvi-II is the first missile to have been developed by the DRDO under the Integrated Guided Missile Development Programme. This missile is developed under the joint collaboration of Defence Research and Development Organization and Bharat Dynamics Limited, the missile was first test-fired on 27 January 1996.