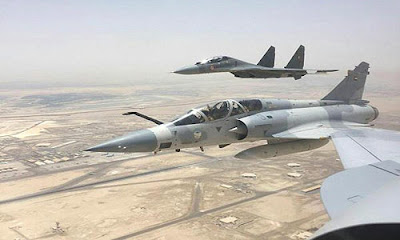 Desert Eagle II, the second in the series of bilateral air exercises between the Indian Air Force (IAF) and the United Arab Emirates Air Force (UAE AF), concluded at the Al Dhafra Air Base in the UAE. The ten-day air combat exercise saw IAF Su 30 MKI participating along with Mirage 2000-9 and F-16 block 60 of the UAE AF.

Mission commanders from both sides participated in the Exercise and availed this opportunity to the maximum to draw valuable operational lessons. Despite the predominantly hot and arid conditions with temperatures well beyond 40 deg Celsius, IAF maintenance support staff succeeded in maintaining high serviceability state of aircraft and equipment. The Indian Air Force had participated previously in Desert Eagle I in 2008.

So let’s do:
1. Name the bilateral air exercises, which has concluded at the Al Dhafra Air Base in the UAE?