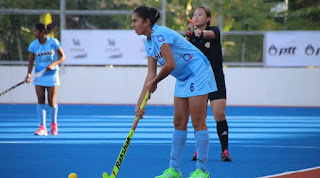 India has defeated South Korea 3-0 to secure the bronze medal at the 4th Women’s U18 Asia Cup 2016 hockey tournament in Bangkok on 22 December 2016. After the win, Hockey India announced cash rewards of Rs.1 lakh for each player. It also announced Rs.50000 for each member of the support staff. In the first half of the game, both teams played were goalless.
Source – The Hindu