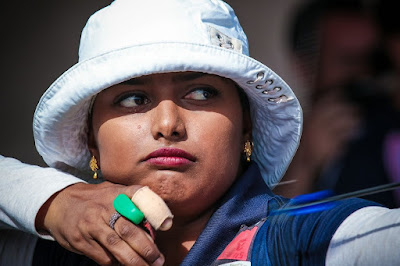 The Indian mixed recurve team of Deepika Kumari and Atanu Das has won silver at the Archery World Cup in Antalya,Turkey. Indian team lost to South Korea 1-5 in the final at Konyaalti Beach Park. Indian team trailed 0-2 in the first set against the top-seed Korean pair of Choi Misun and Ku Bonchan and went down 1-5 in the final.

The Sixth-seeded Indian duo reached final after beating a second-seeded pair of Mauro Nespoli Guendalina Sartori 5-1 in straight sets in the semi-finals. Earlier, the women’s recurve team of Deepika Kumari, Bombayla Devi Laishram and Laxmirani Majhi also went down in the bronze medal clash to Italy 1-5.

Deepika Kumari is an Indian athlete who competes in the event of Archery, is currently ranked World No. 5, and is a former world number one. She won a gold medal in the 2010 Commonwealth games in the women’s individual recurve event. Atanu Das (born 5 April 1992) is an Indian archer. He is supported by the Olympic Gold Quest. He represents India in the Recurve Men’s Individual and Team events. He made his international debut in 2008. His current world ranking is 67.

So let’s do:
1. Who has won the silver medal in women’s category at Archery World Cup in Antalya?