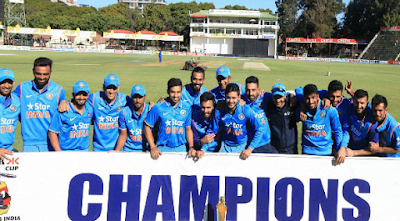 India won the three-match One Day International (ODI) series against Zimbabwe 3-0. In the third and final match played at Harare, India defeated Zimbabwe by 10 wickets. Winning the toss and electing to bat first, Zimbabwe was bundled out for 124 runs in 42.2 over. In the second innings of the match, India chased the paltry target of 125 in 21.5 at the loss of no wicket.
Awards from the ODI series:
1. Emerging player of the series – Yuzvendra Chahal.
2. Man of the series – KL Rahul (196 runs in 3 matches, 1 century, 2 fifties)
3. Highest Run getter: KL Rahul (196 runs in 3 matches).
4. Highest Wicket taker: Jasprit Bumrah (9 wickets).


So lets do:
1. Name the country, who won the three-match One Day International (ODI) series against Zimbabwe recently?