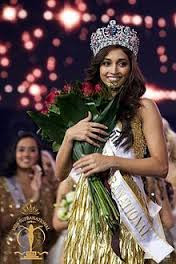 India’s representative Srinidhi Shetty has been crowned Miss Supranational 2016, an international beauty pageant. This marks the second time that India has won the pageant following the win by Asha Bhat in 2014.
Srinidhi Shetty qualified for the competition after becoming the first runner-up at the Miss India Universe pageant earlier this year, where she won the title ‘Miss Diva Supranational’.