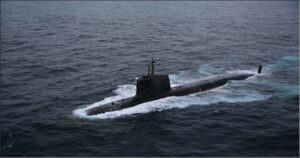 The fourth of Indian Navy’s stealth Scorpene class Submarines of Project 75, INS Vela was launched at the Kanhoji Angre Wet Basin of Mazagon Dock Limited at Mumbai in Maharashtra.

The submarine has been named ‘Vela’ after an earlier submarine, which was the lead submarine, of the erstwhile Vela class, the second batch of the Foxtrot class submarines acquired from erstwhile USSR.