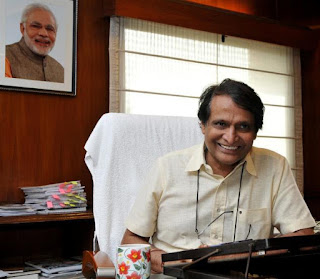 The Union Ministry of Railways launched three passenger service initiatives viz. a Janani Sewa for mothers, optional catering in Rajdhani, and Shatabdi trains on a pilot basis and a children’s menu on trains. These services have been launched by Union Railways minister Suresh Prabhu in New Delhi.
Under this scheme hot milk, hot water and baby food will be available at railway stations. Initially on pilot basis this scheme will be available at 25 railway stations including New Delhi, Howrah, Mumbai, Chennai, Surat and Lucknow.

It will be available only on the Secunderabad-Pune Shatabdi Express and Mumbai Central-Hazrat Nizammudin Rajdhani Express on a pilot basis for 45 days initially. The catering charges would be deducted from the cost of the Rajdhani and Shatabdi Express ticket if a passenger opts out of the catering service.

So let’s do:
1. Name the three passenger service initiatives, Which has launched by Union Ministry of Railways?