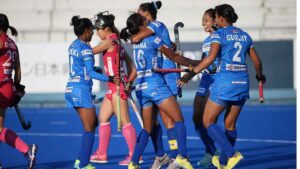 The Indian women’s hockey team have won the FIH Series Finals after defeating Japan. The team rose to a victory with a score of 3-1. The series was held in Japan.

The best player title was clinched by Rani Rampal.

With the win, India has secured their place in the final round of the 2020 Olympics qualifiers.