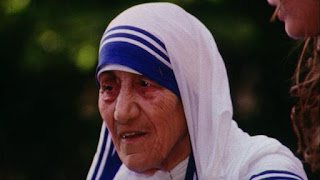 To celebrate the canonisation of Mother Teresa as a saint, IndiaPost on Sunday released a commemorative postage stamp on her. Union Minister of State (MoS) for Communications Manoj Sinha unveiled the postage stamp during a ceremony at the Divine Child High School.
Teresa, who worked for the destitute in Kolkata and became a global icon of Christian charity, was declared a saint by Pope Francis at the Vatican. Mother Teresa MC, known in the Catholic Church as Saint Teresa of Calcutta, was an Albanian-Indian Roman Catholic nun and missionary. She was born in Skopje, then part of the Kosovo Vilayet in the Ottoman Empire.

So let’s do:
1. _______ releases commemorative postage stamp on Saint Teresa.