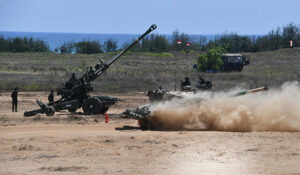 In a major boost to India’s firepower, country’s first indigenously designed and developed Dhanush artillery gun was inducted in the Indian Army during a ceremony held at Ordnance Factory in Jabalpur, MP. The Army had placed an order for more than 110 of these guns with the Ordnance Factory.

Dhanush 155mm/45 calibre towed gun system can be deployed in all types of terrains.
The Dhanush gun system is based on the designs of the Bofors howitzer which was inducted in the Army in the 1980s and would be the third type of artillery gun to be inducted into the force after the K-9 Vajra and the M-777 ultra-light howitzers.

Missile park “Agneeprastha” to be set up at INS Kalinga