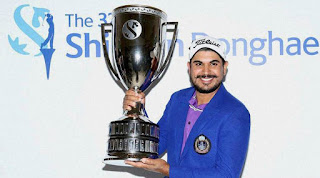 Indian golfer Gaganjeet Bhullar won his 6th Asian Tour title, winning the Korea Open 2016 in Incheon,South Korea. The 28-year-old, whose last Asian title came in 2013, was awarded a cash prize of $196,000 for the win. Bhullar, an Arjuna awardee, has been a part of India’s silver-winning golf team at the 2006 Asian Games in Doha.
So let’s discuss some questions related to this post:
1. Who has won the Korea Open,2016?
2. Gaganjeet Bhullar is associated to which sport?