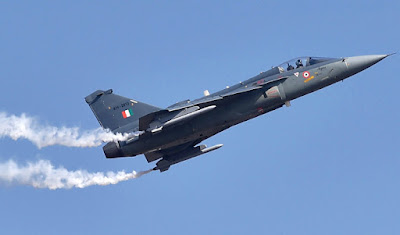 The Indian Air Force inducted the first squadron of the indigenously made Light Combat Aircraft (LCA) Tejas into its fleet. An induction ceremony to induct two Tejas aircrafts was held at the Aircraft Systems Testing Establishment (ASTE) in Bengaluru, which included a multi religious prayer.
The crew members of the first squadron of Tejas, a multi-role supersonic single-engine aircraft designed and developed by the Aeronautical Development Agency (ADA) in collaboration with Hindustan Aeronautics Limited (HAL), also performed pooja and broke coconuts to mark the auspicious occasion. HAL handed over the first two Tejas aircraft to the IAF which will make up the ‘Flying Daggers’ 45, the name of the first squadron of the LCA. The aircrafts also performed a sortie during the induction ceremony.

So let’s do:
1. The Indian Air Force inducted the first squadron of the indigenously made Light Combat Aircraft (LCA) ______ into its fleet.