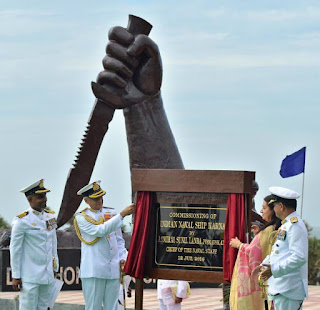 Indian Navy, the naval branch of the Indian Armed Forces has commissioned INS Karna, an independent base of Marine Commandos (MARCOS) at Bheemunipatanam Naval Base, Visakhapatnam, Andhra Pradesh. It was commissioned by Chief of Naval Staff Admiral Sunil Lanba at the commissioning ceremony held at Bheemunipatanam Naval Base. The commissioning of a new base to the Special Forces of the Indian Navy will play important role to safeguard our nation’s vast maritime interests. Captain Varun Singh will be the Commanding Officer of INS Karna.
MARCOS or the Marine Commando Force (MCF) was raised as the Indian Marine Special Force (IMSF) in February 1987 at INS Abhimanyu in Mumbai, Maharashtra. It is capable of operating in all three dimensions viz. in air, at sea and on land. The unit has progressed in terms of manpower, equipment holding, infrastructure and other resources. Since its establishment the force has been established itself as Special Operations Force of international repute.