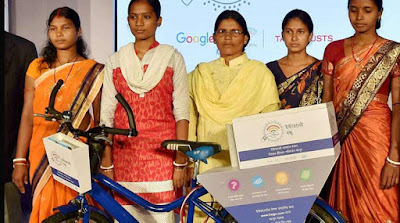 Internet search giant Google has tied up with Tata Trusts to reduce the digital gender gap in rural areas of India such as Purulia, where girls have now been trained to use the Internet and teach others in turn. The initiative, called ‘Internet Saathi’, had been successfully launched in five states, and on July 2015, it began in four more states including West Bengal.
Internet Saathi aims at empowering women and their communities by providing basic training on the usage and benefits of the internet. The programme is driving a meaningful impact in improving the lives of women and their communities in rural India. In the last ten months, the initiative has been active in villages across five states in India, namely Rajasthan, Gujarat, Jharkhand, Andhra Pradesh and Madhya Pradesh.

So let’s do:
1. Name the Joint-Initiative, which was launched for empowering women and their communities by providing basic training on the usage and benefits of the internet?