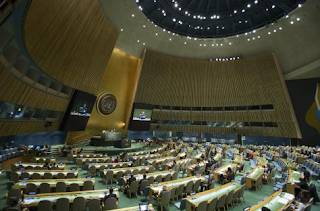 The United Nation (UN) General Assembly has unanimously adopted a resolution approving an agreement to make the International Organisation for Migration (IMO) part of the UN as a related organisation.
IOM, which assisted an estimated 20 million migrants in 2015, is an intergovernmental organisation with more than 9,500 staff and 450 offices worldwide. Founded in the wake of the World War II to resettle refugees from Europe, the organisation celebrates its 65th anniversary in December of this year. The United Nations (UN) is an intergovernmental organization to promote international co-operation.

So let’s do:
Name the organisation, which becomes part of UN, recently?
Source – Indianexpress