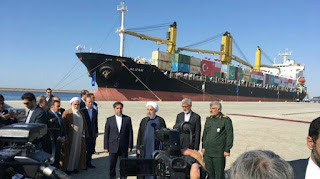 The first phase of Chabahar port was inaugurated by Iranian President Hassan Rouhani. The port, located in Iran’s southeastern Sistan-Baluchestan Province, was inaugurated in the presence of representatives from India, Afghanistan and several other countries of the region. The port will open up a new strategic transit route between Iran, India and Afghanistan, bypassing Pakistan.
The port is likely to ramp up trade between India, Afghanistan and Iran in the wake of Pakistan denying transit access to New Delhi for trade with the two countries.
Source- The Economic Times