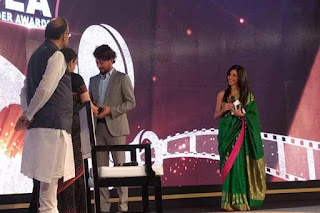 Actor Irrfan Khan was honoured with the Entertainer of the Year award by CNBC. He was felicitated by Finance Minister Arun Jaitley. The actor has been praised for his performance in movies like Piku, Jurassic World and Talvar which released last year. The role of a common man portrayed by the actor in his much talked about movie Madaari was also lauded.
Sahabzade Irrfan Ali Khan credited as Irrfan Khan or simply Irrfan, is an Indian film actor known for his works predominantly in Hindi cinema. He is also known for his works in British films, and Hollywood. Film critics, contemporaries, and other experts consider him to be one of the finest actors in Indian cinema for his versatile and natural acting. In 2011, Khan received the Padma Shri, India’s fourth highest civilian honour for his contribution to the field of arts.
So let’s do:
1. Name the actor, who was honoured with the Entertainer of the Year award by CNBC?