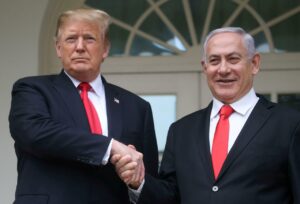 Israeli Prime Minister Benjamin Netanyahu has announced that he would name a new community in the Golan Heights after US President Donald Trump, who officially recognised the disputed area as Israeli territory.

Israel has also stated that in appreciation of the U.S. president, it intends to name a proposed train station near Jerusalem’s Western Wall after him.