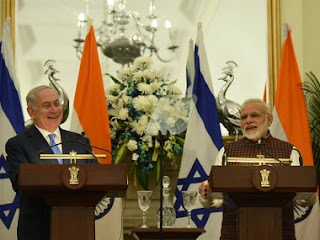 India and Israel have agreed to enhance co-operation in the areas of agriculture, science and technology and security.
Benjamin Netanyahu, who is the second Israeli PM to visit India after Ariel Sharon, was accorded a ceremonial reception at Rashtrapati Bhawan. The first one took place when PM Narendra Modi visited Israel in July 2017, becoming the first Indian leader to visit the Jewish state.
Static/Current Takeaways Important for Syndicate Bank PO Exam 2018-
Source- The Indian Express


Read This News in Hindi Here
×