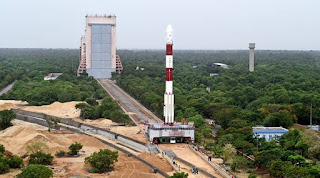 The Indian Space Research Organisation (ISRO) has launched its 37th Polar Satellite Launch Vehicle, or PSLV, carrying eight satellites from its Sriharikota base.
Out Of the eight satellites, three each are from India and Algeria, and the remaining are from Canada and the United States. The main load, however, is the 371-kg Indian weather satellite SCATSAT-1, which is meant for ocean- and weather-related studies.
So let’s discuss some questions related to this post:
1. Expand the terms ISRO and PSLV?
2. ISRO has launched PSLV’s longest flight SCATSAT-1, carrying 8 satellites from which spaceport?