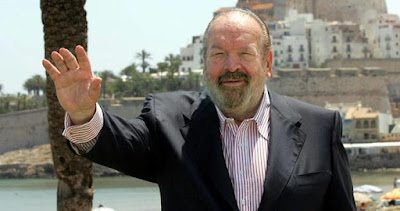 Italian film actor Bud Spencer  known among his fans as the ‘big friendly giant’ of the screen because of his height and weight has died at age 86 in Rome. He appeared in, produced and directed over 20 films together.  He was a regular in Spaghetti Westerns (a western film made cheaply in Europe by an Italian director).

Pedersoli’s first film role was in Quel fantasma di mio marito,an Italian comedy shot in 1949 and released in 1950. In 1951 he played a member of the Praetorian Guard in Quo Vadis, a fampus epic film shot in Italy made by MGM and directed Mervyn LeRoy. Spencer was born in the southern Italian city of Naples in 1929, but later moved to Rome, where he became a promising swimmer. In 1950, he was the first Italian to swim 100m in under one minute. He abandoned his swimming career after the 1960 Olympics in Rome.