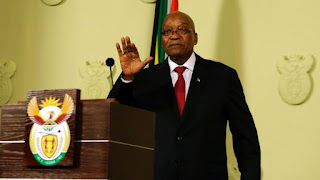 South Africa’s embattled President Jacob Zuma has resigned. He announced the decision in a televised address to the nation after the ruling African National Congress (ANC) party threatened to eject him from office via a parliamentary vote of no confidence today.
The 75-year-old, who was the country’s President for the last 9 years, has been under increasing pressure to give way to Deputy President Cyril Ramaphosa, ANC’s new leader. Mr Zuma’s resignation followed weeks of intense public pressure to step down amid long-standing corruption allegations.
Source- BBC News