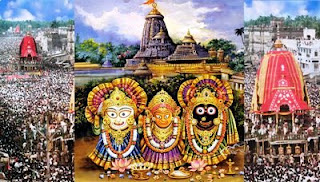 In Odisha, the most awaited biggest annual festival of Rath Yatra or Chariot Festival at Puri commences today (25th June 2017). This is one of the most celebrated Hindu festivals of the country as well as the whole world. The famous festival that is celebrated usually in the month of June-July commences when the chariots of Lord Jagannath accompanied by his elder brother Balabhadra and sister Devi Subhadra are brought out on to the main street of Puri.

The Chariots are then taken to the Shri Gundicha Temple to their aunt’s house, where the deities enjoy nine days stay and are served with sweet pancakes. The festival honours the Lord Jagannath’s visit along with his siblings to the temple of Queen Gundicha. Jagannath Puri temple is called ‘Yamanika Tirtha’ where, according to the Hindu beliefs, the power of ‘Yama’, the god of death has been nullified in Puri due to the presence of Lord Jagannath, popularly known as Lord Krishna, and his siblings – Lord Balbhadra and deity Subhadra – in the Jagannath Puri temple.
Static Takeaways from the above News:
Source- AIR News