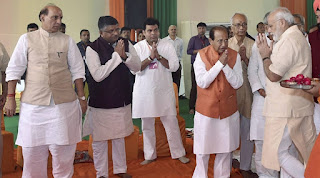 Senior BJP leader Jagdish Mukhi on Monday assumed office as the 12th Lieutenant Governor of the union territory of Andaman and Nicobar Islands. Mukhi took over from Lt General AK Singh (Retd). He had been a minister and Leader of Opposition in the Delhi Assembly in the past. Mr Mukhi was a professor in Delhi University and has authored a book titled ‘Company Law and Secretarial Practice’.
The Andaman Islands are an archipelago in India’s Bay of Bengal. These roughly 300 islands are known for their palm-lined, white-sand beaches, mangroves and rainforested interiors. Surrounded with coral reefs that support marine life including sharks and rays, they’re destinations for scuba diving and snorkeling. They’re also popular for water skiing, windsurfing and fishing. Oceanside camping and hiking is possible on some islands.

So let’s do:
1. Who is the Lieutenant Governor Of Andaman And Nicobar?