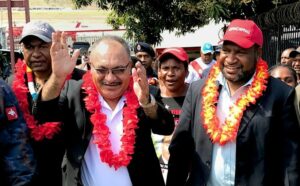 James Marape, a former finance minister and critic of a major global gas development deal, has been elected by parliament as the prime minister of Papua New Guinea.

His election came after weeks of political turmoil that saw his predecessor, Peter O’Neill, resign having lost the support of the House after more than seven years in power.