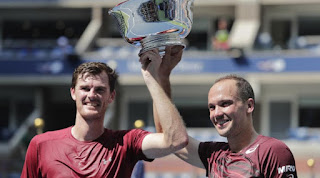 This was Murray’s 3rd doubles slam title of his career, and second with Bruno Soares, with the pair winning the Australian Open earlier this year.

So let’s discuss some questions related to this post:
1. Name the Tennis pair, who have won their second Grand Slam doubles title?