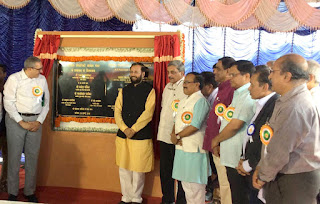 Prakash Javdekar, Union Minister of Human Resource Development inaugurated Indian Institute of Technology (IIT) in Goa and he also laid the foundation stone for IIT Goa students’ hostel. The newly set up IIT Goa shall function from temporary campus at Goa Engineering College, Farmagudi and will be  mentored by IIT Mumbai.
The temporary campus of IIT Goa at GEC is fully equipped with class rooms, laboratories and modern hostel buildings. This campus is expected to serve the needs of IIT Goa for the first couple of years. The campus for the Indian Institute of Technology Goa (IIT Goa) will be developed at Loliem, a quiet town in Canacona taluka in the southernmost tip of Goa. It is bounded by Galgibag River in the North, village of Poinguinim along the East, Uttar Kannada district of Karnataka state in the South and Arabian Sea to the West

So let’s do:
1. Prakash Javdekar, Union Minister of Human Resource Development inaugurated Indian Institute of Technology (IIT) in which city,recently?