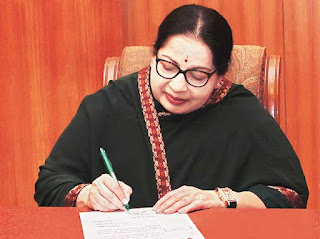 Tamil Nadu (TN) Chief Minister J Jayalalithaa has announced Rs 4126 crore worth schemes in the energy sector, including setting up of a 2×1500 MVA sub-station in Virudhunagar to transmit power generated from a 1600 mw power plant coming up in Ramanathapuram.
Making a suo motu statement in the Tamil Nadu Assembly, Jayalalithaa said works at the 2×800 mw thermal power station at Uppur in Ramanathapuram were underway and scheduled to be completed in 2020. Further, Jayalalithaa announced Rs 80 crore towards the upgradation and modernisation of the Kodayar Hydel power station, which has been in operation since 1970. Its installed capacity will be enhanced to 70 mw from the existing 60 mw, while steps will be taken to expand its lifespan to another 25 years

So let’s do:
1. Name the state, which has announced Rs 4126 crore worth schemes in the energy sector?