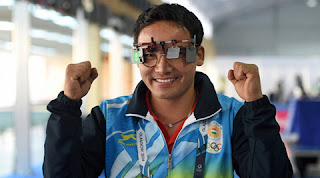 ‘Pistol King’ Jitu Rai pipped three-time Olympic champion Jongoh Jin of Korea to clinch the silver medal at the ISSF Shooting World Cup, signalling his intentions ahead of the Rio Games. Rai shot 199.5 in the finals to bag the silver medal in men’s 10m air pistol. Brazilian Felipe Almeida Wu won the gold medal with a total of 200.0, while Jongoh, who topped the qualification, totalled 178.8 in the elimination round to be content with the bronze.

Rai qualified sixth after he shot 580 with 22xs. The eventual gold medal winner qualified in seventh position. It was Rai’s sixth World Cup medal and second this year after winning one in Bangkok. Rai is seen as one of India’s biggest medal prospects in at the upcoming Rio Olympics. Former world number one Heena Sidhu qualified for the finals of women’s 25m pistol after finishing fifth in the qualification stage with 582. The World Cup in Baku is the last shooting tournament before the Olympics in August.

So let’s do:
1. Name the India shooter, who has won the silver medal at the ISSF Shooting World Cup?