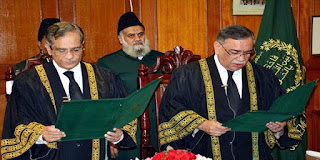 Justice Mian Saqib Nisar has taken oath as the 25th Chief Justice of Pakistan. The oath was administered by the country’s President Mamnoon Hussain at the President House. The event was attended by Prime Minister Nawaz Sharif and other dignitaries.
Justice Nisar has replaced Justice Anwar Zaheer Jamali who retired after serving as Chief Justice for 15 since his appointment in September 2015.
Source- The Business Standard