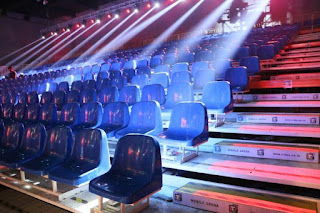 The Arena by TransStadia in Ahmedabad, venue of the ongoing Kabaddi World Cup, is India’s first convertible stadium. The Rs. 550 crore project converts an outdoor stadium into an indoor arena in 6 minutes at a touch of a button. The facility has a seating capacity of 20,000 and can house 14 sports which include football but not cricket.
So let’s discuss some questions related to this post:
Q1. Where is the India’s first convertible stadium?
Q2. Which country has hosted the Kabaddi World Cup 2016?
Source – The Hindu