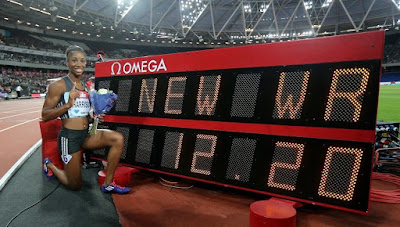 American hurdler, Keni Harrison broke a 28-year-old world record in the 100m hurdles, clocking 12.20 seconds at the London Anniversary Games. She beat the previous record of 12.21sec set by Bulgaria’s Yordanka Donkova in 1988. Harrison, was already the fastest woman in the world this year, but will not be at next month’s Olympics after finishing only sixth in the US trials. The previous world record of 12.21 had stood since 1988 and was held by Yordanka Donkova of Bulgaria.
Kendra “Keni” Harrison is an American hurdler. She represented the United States at the 2015 World Championships in Athletics and the 2016 IAAF World Indoor Championships. Harrison is the current world record holder in the women’s 100-meter hurdles with her time of 12.20 seconds, set on July 22, 2016 at the London Müller Anniversary Games.

So let’s do:
1. Name the American hurdler, who has broke a 28-year-old world record in the 100m hurdles?