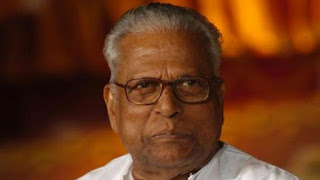 The Kerala cabinet has decided to appoint veteran CPI-M leader V.S Achuthanandan as the chairman of the Kerala Administrative Reforms Commission with cabinet rank. Former chief secretaries Neela Gangadharan and C.P Nair will be the other members of the three-member panel headed by Achuthanandan.
The Kerala Assembly had earlier passed an amendment bill to pave way for his appointment. According to the Legislative Assembly (Removal of Disqualifications), in the event any MLA is appointed as chairman of the Administrative Reforms Commission, such appointment would entail his being disqualified as MLA.

So let’s do:
1. Name the person, who has appointed as the Kerala chairman of Administrative Reforms Commission with cabinet rank?