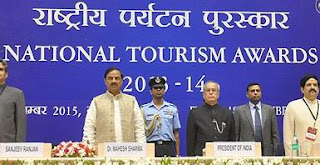 Kerala Tourism has bagged six National Tourism awards for 2014-15 in the marketing category for states. It received two more awards, including the one for its Responsible Tourism (RT) initiative in Wayanad. Lok Sabha Speaker Sumitra Mahajan presented the awards to Principal Secretary Venu V and Director U V Jose in the presence of Union Tourism Minister Mahesh Sharma at a function at Vigyan Bhavan in New Delhi.
Kerala Tourism received three out of the six awards for states in the Tourism Promotion and Publishing category, including the one for ‘Most Innovative use of Information Technology’ – social media/mobile app. The Wayanad initiative, which has transformed the hilly district’s economy through intensive participation of the local people, was selected for the award in the ‘Responsible Tourism’ category.