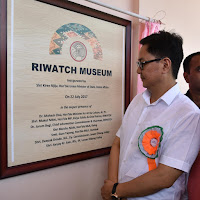 Union Minister of State for Home Kiren Rijiju has inaugurated the Research Institution of World Ancient, Traditional, Culture & Heritage (RIWATCH) Museum at Roing in Arunachal Pradesh.
Later, on the sideline of his visit to Roing, Rijiju also inaugurated the 235-meter long Chimari Bridge, which would serve as a life line between the National Highway 52 of Roing-Tezu.