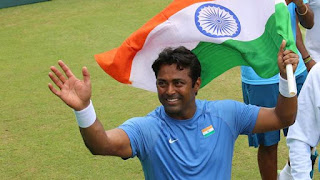 Indian tennis’ ageless wonder Leander Paes became the most successful doubles player in the history of Davis Cup as he combined with Rohan Bopanna to not only grab a record 43rd win but also bring the country back in the tie against China.
Forced to play together by AITA, 44-year-old Paes and Bopanna downed a fighting Chinese pair of Mo Xin Gong and Ze Zhang 5-7 7-6(5) 7-6(3) in the do-or-die doubles rubber of the Asia/Oceania Group-I tie.
Source- The Times of India