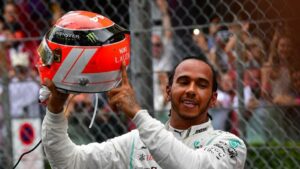 Lewis Hamilton won the Monaco Grand Prix to extend his championship lead over Mercedes teammate Valtteri Bottas. Hamilton struggled with grip in the latter stages and was under constant pressure from Red Bull’s Max Verstappen.

But Verstappen had earlier picked up a five-second time penalty. So even though he finished just behind Hamilton, Verstappen was fourth overall behind Bottas in third and Ferrari’s Sebastian Vettel in second.