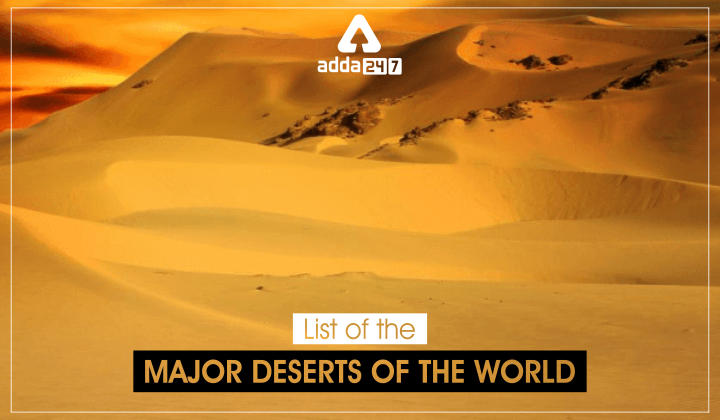 Deserts are dry areas of land with very low vegetation and these are a very important part of Earth’s ecosystem. These areas have very low precipitation and living conditions are hostile for plant and animal life. Deserts cover almost one-third of the Earth’s surface. Deserts are formed by weathering process as large variations in temperature between day and night put strains on the rock which consequently break it into pieces. The amount of rainfall in the desert is low but when the rain falls on the hot rocks it causes them to shatter into pieces and results in more fine fragments of Rock.

The types of plants and animals found in deserts are adapted to survive the harsh condition of deserts. Plants are adapted to survive rough weather, these plants are tough and wiry with small or no leaves, and the water-resistant cuticles and spines deter herbivory. Animals in these areas need to keep cool and find enough food and water to survive. The animals are adopted to extract most of their needs from their food and concentrate their urine. Some animals remain in the state of dormancy for a long time and get ready to become active again during the rare rainfall season. This animal also reproduces rapidly while conditions are favorable before returning to dormancy.

Largest Deserts in the world

Q2. What type of land is desert?
Ans. A large area of land which is dry with sparse vegetation is known as a desert. These are one of Earth’s major types of ecosystems.