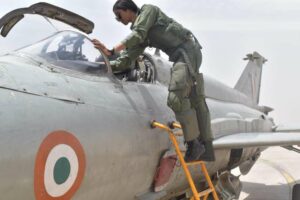 Flight Lieutenant Bhawana Kanth became the first woman pilot of the Indian Air Force to qualify to undertake missions by day on a fighter aircraft. She completed the Day Operational syllabus on MiG-21 Bison. Bhawana joined the fighter squadron in 2017 and flew the first solo on MiG-21 Bison in 2018.