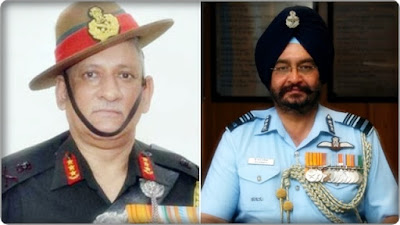 The Vice Chief of Army Staff, Lt General Bipin Rawat will be the new Chief of Army Staff, while Air Marshal BS Dhanoa, the next Chief of Air Staff. They will take charge in the afternoon of 31st of this month.
Lt. Gen Rawat will replace General Dalbir Singh. Lt. Gen has tremendous hands on experience of serving in combat areas, and at various functional levels in the Indian Army over the last three decades. He has handled various operational responsibilities in many areas, including along the LoC with Pakistan, the LAC with China, and in the North-East. Air Marshal Dhanoa, who will replace Chief of Air Staff Air Chief Marshal Arup Raha, was commissioned into the fighter stream of the Air Force in June 1978. He has served in various squadrons, and also in the Intelligence Directorate of Air Headquarters.
Source- Business Standard