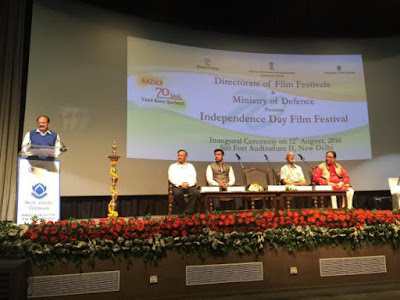 Union Information & Broadcasting Minister, M Venkaiah Naidu has inaugurated the Independence Day Film Festival in Delhi’s Siri Fort Auditorium. The festival will kick-start with Richard Attenboroughs Gandhi. Addressing the people, Naidu said, Independence Day is an occasion to recall the lives of our great leaders, the sacrifices they have made. Our freedom struggle has given the world the power of non violence.
According to Naidu, Indian cinema played a vital role not only during the freedom movement but also helped propagate the deeds of our leaders. There are a number of classics like ‘Gandhi’, ‘Shaheed’, ‘Ayirathi Thollayirathi Irupathi Onnu’, ‘Haqueeqat’ and others that have inspired us.

So let’s do:
1. Name the person, who has inaugurated the Independence Day Film Festival in Delhi’s Siri Fort Auditorium?