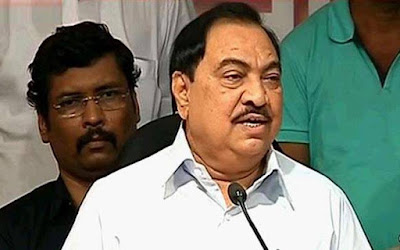 Eknath Khadse, the most senior minister in the Maharashtra government, has resigned amid twin scandals over an illicit land deal and his cellphone allegedly appearing in the call records of most-wanted gangster Dawood Ibrahim. His resignation was formally accepted by Maharashtra governor Vidyasagar Rao.
He is a six-time MLA from Muktainagar constituency in Jalgaon Maharashtra. Eknathrao Ganpatrao Khadse is a member of the Bharatiya Janata Party (BJP) and he was elected to the position of Opposition Leader in the Maharashtra Legislative Assembly in November 2010. He represents Muktainagar (Assembly constituency) in Jalgaon district of North Maharashtra. He was the state Finance minister and later additionally took on the responsibility of the Agriculture ministry in the Shiv Sena/BJP government.

So let’s do:
1. Who is the Governor of Maharastra ?
2. Name the person. who has resigned amid twin scandals ?