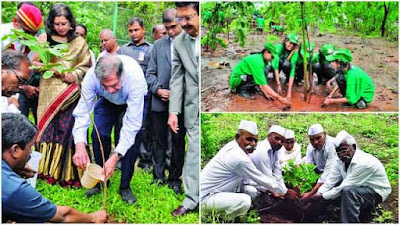 Maharashtra government started an initiative for plantation of about 2 crores trees. The initiative was flagged off by Maharashtra CM Devendra Fadnavis along with Finance and Forest Minister Sudhir Mungantiwar. As per the plan, while the forest department was supposed to plant 1.5 crore trees of the total target of 2 crore, officials claimed that they have gone beyond it and planted over 3 crore saplings. It’s also expected that remaining 50 lakh trees to be planted by other government departments along with members of the public as well as NGOs will also exceed the target.

While the plantation was going on at 65,674 sites, in Mumbai, it was kick-started at Maharashtra Nature Park (MNP) with the plantation of 3,800 trees on a five-hectare plot along the banks of Mithi river, attended by minister of environment, forest and climate change Prakash Javdekar, governor C Vidyasagar Rao, chief minister Devendra Fadnavis, forest minister Sudhir Mungantiwar and Shiv Sena chief Uddhav Thackeray.

So let’s do:
1. Name the state, which has started an initiative for plantation of about 2 crores trees?